Feasting at Feast: Lunch the Day After New Year’s

I realize that if I do not make some of my entries brief, I will never get to them done. One of my New Year’s resolutions is if I do not have time to write an in-depth review to just post a brief descriptionand some pictures on the blog.

I have reviewed Feast on Lower Westheimer twice already, please refer to the index on the right. Alison Cook put Feast on her list of the top new restaurants in 2008 http://tinyurl.com/a5mhga. I couldn’t agree more.

Originally I had wanted to visit Randy Rucker at Rainbow Lodge, because (1) I am a big fan of Randy’s cooking and (2) I never wrote up a review of my first visit there when I had the chef’s tasting menu (which was wonderful.) I’m never full had just written up the restaurant complete with great photos http://tinyurl.com/99sru9 . But they were closed, due to the holidays.

So Feast with its reasonably priced two course lunch for $12.95, was a worthy second choice. Once I was in the rustic feeling dining room, being waiting on by Meagan, I knew I was in for a treat.

During my visit Feast inadvertently also had some entertainment for me to watch. The couple directly in my view could not keep their hands off of each other. It was quite steamy between the two of them. I know this sounds naughty, but I think they were married and not to each other. I have pictures, but I think I'll just refrain from posting them, just in case I am right. 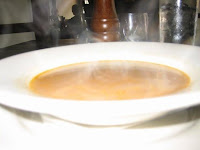 For my first course I had the “French Fish Soup with Rouille and Croutons”, which I think had mustard rather than rouille, and also had a mild white cheese. The delightful aroma of the soup immediately perked me up, this was 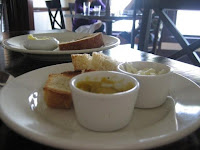 going to be a great year in food. I added the cheese, mustard and croutons int 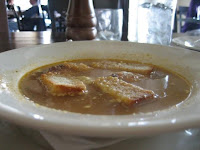 o the soup. Needless to say, I did not leave a drop of soup and I would have licked the bowl had I been home. This could have been enough for lunch for me, but there was more. 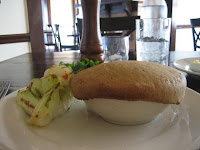 My main course was “Steak Pot Pie with Cauliflower Cheese”. As a child I never enjoyed pot pies, as they always were a mush of vegetables and flavorless meat. This could not be further from the description of the pot pie 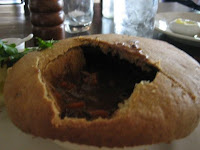 at Feast. The brown sauce inside the pie was rich with the flavor of the meat and carrots, as well as other spices; I could have eaten that dish without the meat and have satisfied my meat cravings.

I do not know how they did it, but the steak was not dried out or tasteless. A forkful of the crust, with a baking soda overtone dipped in the brown sauce was a delight on the palate. The cauliflower on the side was a roasted piece of cauliflower with just a dusting of cheese and worked well as an accompaniment to the pot pie. I really struggled to finish the dish, but succeeded, which is a testament to how much I enjoyed it.

LOL - it looks like this did not turn out so brief.

Happy New Year and thank you for following my food adventures this past year!

I thought the set lunch was more in the $20 range. Did they lower their prices?!

They did change their prices. They also limited the menu, but there seems to be plenty of variety. Go check their web site during the week and see the menu of the day.