Sauté World Bistro: Where Are They Going with their Food? 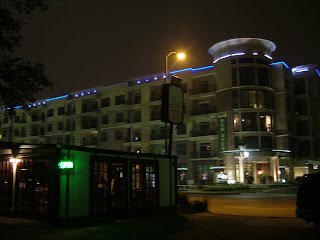 I was thrilled when I got the invitation to attend a free sampling dinner for food bloggers at the two-month old Sauté Bistro. I have drank excellent free-trade tea and eaten at their first restaurant, Té. Therefore I was looking forward to eating at one of similar ilk with a more expanded menu.

The place is pretty, built originally as a house and added on to over the years, it left its domestic heritage behind and has been used as a restaurant for a while. The venue, albeit a bit noisy where we sat in the front room, is charming.

On a frigid Tuesday evening, about twelve of us bloggers gathered to try Sauté‘s menu and a few new dishes which the restaurant choose for us. As I entered, I was greeted warmly by one of the owners, Kevin Lacobie and we were later joined by his wife, co-owner Connie Lacobie. The chef, Garry Hollie, who comes from , presented and explained each course.

I wanted to love this restaurant for many reasons, most notably the graciousness of the owners, their philosophy of using local ingredients and the comfortable interior of the building. The location on near Kirby and next to Blue Fish and the Hobbit seems like a place that would get a decent amount of traffic.

First of all the place was fairly empty. A scene I am starting to notice more and more as I dine out during the week. Perhaps is finally feeling the consequences of the current economic slide and people are starting to eat out less. If this is so, it is now a more difficult time for new restaurants to survive.

At Sauté the eclectic menu features dishes influenced by a variety of food cultures including; Asia, the Mediterranean, Europe, , South America and the .

But instead of feeling like I was on a journey through variety of world cuisines, I felt like I was sampling a hodgepodge of highly or not spiced foods. There was not one dish, beyond the Mexican chocolate cake, that married the flavors of a particular cuisine seamlessly with all the ingredients. Additionally the menu we sampled was heavy on spice, protein and starch – where were the vegetables?

Please keep in mind that as guests of the restaurant, the menu was chosen for us. I personally would not have picked the mix of dishes we had for a group like ours and this may had been one of the fatal flaw of the evening. 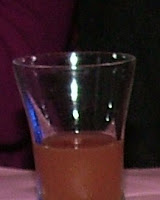 We began with an aperitif, a “Teatini” called Aloha Sunrise Waikiki, made with tea, tequila, orange juice, and simple sugar. It was yummy, with a good balance of flavors that were not overpowering. This drink worked.

During our meal we tasted two reasonably priced wines one a Casa Nostra, a French Rosé ($32) and a Ca ‘del Santo, Italian Pinto Grigio ($28). They both paired nicely with the food, but we could have used a wine bucket to keep them cooler.

Our first course was a current menu item, the spicy chicken pastelitos with salsa verde and sweet chili sauce on the side. The pastelitos tasted mainly of pastry and spices, I could hardly make out the flavor of the meat and if there were any other ingredients stuffed inside.

Next we were presented with two small pieces of bread with melted gorgonzola cheese and honey drizzled on it. I found it tasty but too sweet. It was curious to me why we received them as a separate course, as a piece of the bread shows up later as an accompaniment to a pasta dish and no bread was ever served during the meal. 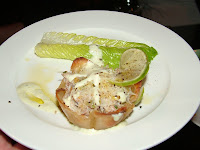 I truly disliked the cold Crab Salad with Crispy Wonton. The crab meat tasted fishy, the melted Parmesan cheese was cold on the top of the crab meat mixture and it was served in a fried wonton. The taste of the crabmeat was more similar to canned crabmeat than fresh, perhaps it was old?

The chef’s love affair with fried food continued, I was willing to say stop – none of the fried foods I had so far were worth the extra calories frying adds, but no we were continuing. Voila, the cheese steak eggrolls. 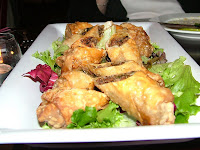 I found them soggy. I could hardly taste the mushrooms or make out the flavor of the cheese. It is served with a cheese dipping sauce on the side and had the flavor of the kind of sauce one expects on Fettuccine Alfredo.


At this point, I am getting hungry. I have not finished a course yet and I thinking when are we are getting a green salad or a vegetable dish to balance the protein and carbohydrate heavy meal we have been consuming. Perhaps I should be eating the leafy green vegetable under the eggrolls? But I choose to drink a little more wine, which is fruit, is it not? 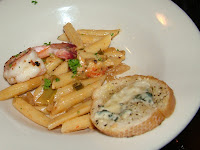 The Creole Pasta had one piece each of shrimp and crawfish. The dish comes with a somewhat over the top peppery cream sauce. That overly sweet bread with cheese and honey has returned, sitting on the rim of the bowl.

Now I am starting to think what kind of vegetables do I have at home and will I have the energy to cook them? I pray silently to myself, asking the gods of food to provide us with some sort of vegetable or salad for the next course. 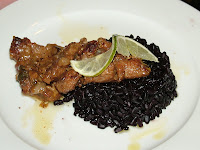 But no, what comes next is a real surprise, Alligator Piccata with Forbidden Rice , a Cajun-Chinese fusion dish. I taste lemon, as I should, but the dish is garnished with lime. The picatta breading is cooked perfectly. Tell me, what was the point of using alligator when it did not add anything special to the dish? Tasting a bit more, I could tell that the picatta was a little to salty for me and the rice is bland. Some of the plates around me have capers on them; my plate looked like it had one, although the rest may have ducked under the rice.

The dessert choices were more of a hit with me. The Banana Layer Cake with fresh fruit was decent. 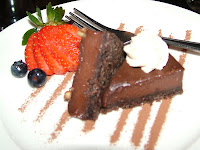 My advice is simple; do what you do best. Té on Fairview works well. Ask yourself why?

The menu at Sauté is all over the place. I could not really click with the what the meaning of world bistro theme was in any positive light. The owners and or chef of Sauté need to figure out who their clientèle is and cater to them.


Furthermore, upon reflection, Sauté left me confused. Confused as to what the intention of calling the restaurant a "World Bistro" really meant? Confused as to who are the target customers? Confused about the meaning of the web tag line: Dining Drinks Dancing?

I want to support restaurants that are committed to using local fresh foods, and local chefs who are taking a chance but at this point I am not ready to support Sauté.

At Bedford on Monday, Elizabeth and Bao said that they loved Asia Market in the Heights and thought I should give it another chance.

Despite the fact that I am over a month behind in writing anything about restaurants, I wanted to tell you right away that I picked up some great Thai food this evening. As I drove to Asia Market in a surreal (because it is Houston) snow storm (okay light flurries but real snow), I thought this is crazy, but I was driven to go.

I ordered everything medium Thai spicy, which was very much to my liking. I had the Aythaya Pad Thai with tofu, dried shrimp, and chicken. The menu said there were fresh shrimp in the dish, but I never found them, Perhaps they are in the leftovers? Pad Thai use to be my bellwether when it came to measuring up the quality of Thai food, but over the years I have had such lousy, overly sweet Pad Thai, I gave up up on this notion. Asia Market's version of Pad Thai has restored my faith. It was perfectly cooked and a flavorful blend of spices meat,

By the way Aythaya or Ayutthaya was a Thai Kingdom from the 14th - 18th centuries. It incorporated many of the Shan states, including parts of modern day Thailand, Myamar, Laos, Yunnan provence in China, Cambodia, and Malayasia.

For the second course, I had the Kang Ped Nor Mai, a red curry with just enough after burn to tickle my palate. It was a flavorful mixture which included eggplant, bamboo shoots and pork. Next time I need to order the sticky rice instead of the white rice, as I enjoy the consistency of sticky rice for a change and I do nto make it at home.

For the last course I had Som Tum, a spicy shredded papaya salad with tomatoes, dried shrimp and whole peanuts. Tum rhymes with yum and I think it may be a synonym for this dish!

To drink, I decided I did not want tea and instead had my new favorite soda: DRY Lavender. With it's subdued sweetness and slight effervescence, it works very nicely with spicy Asian food.

Once again I over ordered, as I think I have enough left over for at least two more meals.
Posted by Food Princess at 7:52 PM 2 comments:

I give up, I'll never catch up with the restaurants I have been to in the last month. Although, I will try to write something brief soon.

There is just too much going on and not enough time. I am glad to complain about that, rather than being bored!
Posted by Food Princess at 7:36 PM No comments: