OMG, I know it seems forever since I wrote. I came back from Romania on July 1 and left again on July 3 to drive to Virginia. After driving 36 hours with catnaps along the way, at rest stops and all night gas stations I arrived in Vienna. I wanted to get there in time to see my favorite baseball All Star, my nephew play his town’s one of the play off games. 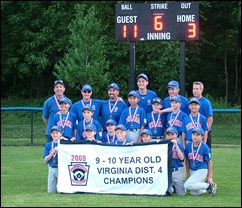 What a game that was… they decimated the other team. On Thursday the won the town’s championship game for the 9-10 year old range. I was very glad I got to see his victory.  I also got to see my other sister, her husband and children (who where there to cheer my nephew on to victory.) This week it is on to the state championship games.

I spent  week at my sister’s that included my other nephew’s birthday party at the Air and Space Museum, which included a good meal at Gladstone Inn (to be documented later in some detail with pictures), I drove up to Jersey to continue my vacation with my BFF, D.

D. and I left yesterday for Canada. We made it to about an hour and a half outside of Quebec City and will arrive there shortly.  I am even using some of my French, which is amusing? or comical? I believe this is the furthest north I will be going this summer in North America.

Can you believe I am on my seventh week of vacation?