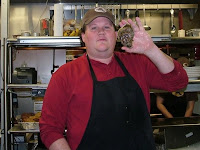 Hot off the presses: Yesterday I found out that Jonathan Jones is now one of the owners of Beaver's ! Congratulations JJ your influence on the menu is certainly apparent. 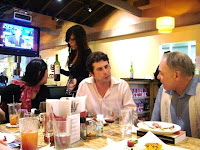 Robin Goldstein, author of the ““Fearless Critic” series of restaurant review books that are refreshing reads about restaurants because of their candidness in the reviews of them, swung by and invited some of the Houston Chowhounds to join him at lunch.

The purpose of the get together was to eat good food and give Robin input for the 2nd edition of the the Houston version of the Fearless Critic.


We met up at Beavers on Decatur off Sawyer in the Sixth Ward, for an A+ meal. JJ really can really cook good some good and satisfying food.


Yesterday was a beautiful day in ; I almost wish we had been able to eat outside on the peaceful porch. Upon arrival we started with some of Beaver’s signature cocktails. At JJ’s recomme

ndation I had the Belt Strap. The drink was made up of Cruzan Black Strap Rum, Southern Star Pine Belt Ale and lemon juice. I would never have tried this drink on my own. The drink is a complex meld of flavors, that I found not only easy to drink, but satisfying. 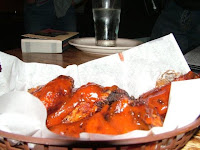 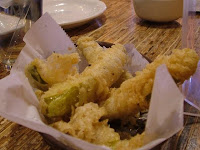 pickles and they were surprisingly good.) The stuffed pepperoncinis were crispy, gooey and smoky tasting.

Next Course Was The Fish 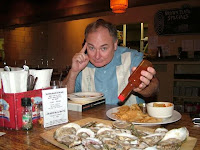 First came two different types of oysters, one kind from , the other from the Gulf. JJ told us we had to eat them without any sauces, dressing, etc. This was an eye opener, I found both of them too briny tasting. On the other hand the fried oysters on tortilla chips we ate later tasted much better. 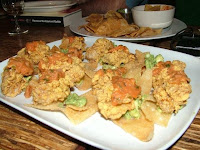 This was followed by a fish dish. I know the fish was

spiced. Certainly a dish I had not tried before and look forward to eating again. The vegetarian tamales (which I had ordered only a week before when I was there) are a hit with me, they are "meaty" enough tasting to satisfy many carnivorous skewed palates. 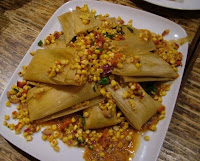 After that - can you believe there was more?

We had a sampling of all the smoked barbecue; chicken, brisket, home-made Berkshire pork sausage 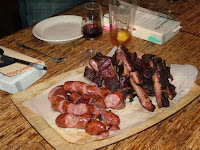 , and Bershire Country Rib sausage. All served with the "ring of fire barbecue sauce". The barbecue has improved dramatically. While the quality of the meat is top notch, I still prefer other barbecue styles in Houston.

All this was accompanied by some very special wines that Robin shared with us. Including a Bulgarian red wine and an outstanding French dessert wine.

It was a very good meal. I enjoyed every dish we had and I recommend you get down to Beaver's as soon as you can, even if you have been there before. JJ is not just leaving his mark, his is stamping on all the food and Beaver's is the better for it.

Posted by Food Princess at 4:41 PM

hey Thanks for the plug on my smile,but I am selling saltless products next time you are at one of the other markets please stop by for a free sample
essiac tea4life transfer factor cardio