Not to Greasy, Dinner Style Taste – Burgers at Christian's Totem 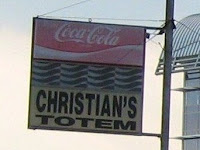 Monday I was in the mood to eat out a burger - the kind I got when I was a kid growing up in , fresh tasting, slightly oozing and with some good fries or onion rings. As a grown up, I also wanted a 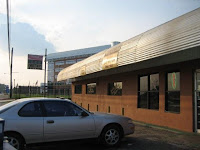 nice malty beer.
A quick shout out to my friends at the Houston Chowhounds came up with a few suggestion

s and two people who were willing to join me. We choose Christian's Totem, a place on just north of I-10.

It fit the bill perfectly for me. The place is a bar with a restaurant. It reminds me of , which was exactly what I wanted. Now if the food was decent I would be a happy camper. 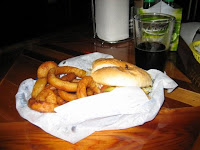 I was joined by V and JavaPeg. JavaPeg and I split a half pound cheeseburger cooked medium rare and a side of onion rings ; V. had the burger platter with fries. The burgers came in plastic baskets and we added salt to the fries and onion rings . I appreciate having control over how much salt is added to my food.
I enjoyed the burger as it was juicy but not to runny. The onion rings 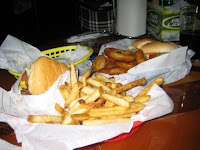 were good as well for what they were. I thought the fries tasted stale and undercooked. They had a decent selection of beer on tap, looked like about a dozen. I had a Shiner Bohemian Black Lager on tap, which was nice and malty and not to bitter. The whole bill came to about $12.00 plus tip for the two of us. The only other hamburger place I have been to in Houston is Langkford Grocery a few years ago, it was good, but the burgers were too messy for me.
As I was paying the bill, two guys came in and order the works, half pound cheese burgers, fries and then two Bud Lights in bottles I just don’t get it. I don’t get buying a bottled beer when there is such a good variety on tap and I don’t get going light at all, just drink water is what I always say…..
I am still on a hamburger kick. On Wednesday night. I bought freshly ground 85% lean chuck at Whole Foods. I hand patted down the meat into a rectangle and then I sprinkled finely chopped onions, cheddar cheese, salt and pepper on half of it, folded it over and cut it into small squares (White Castle size sliders) and pan fried them. I added some spinach sauteed with garlic and Kettle Chipolte Chili Barbecue chips as sides and drank a Brewhouse Brown Ale from Real Ale Brewing Company (Christian's sells on tap.) My burgers were juicy and tasty (I put Dijon mustard on them), the spinach added more iron than the lettuce at Christian's, the chips and the beer were a nice touch - but it was not the same experience or atmosphere. Sometimes you just want the deep fried onion rings and the feel of a divey bar to go along with your burger and Christian's Totem fit the bill.

Oh, I almost forgot to tell you , that when I was paying the check, the woman behind the register commented how nice it is to go out with your girlfriends. She was right, because it is nice going out with my fellow Chowhounds and the camaraderie we are developing by talking via email and eating together has been a wonderful experience.
Posted by Food Princess at 8:07 AM

LOL - between you, me and whoever else reads this of course, I think I am meeting a couple of friends there tonight because looking at the pictures made me hungrey as well.