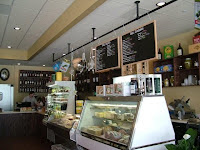 Last Friday, I ventured over to Raia’s Italian Market http://raiasitalianmarket.com/ on with Neverfull, Fulmer, Chief Lambo and a friend of Fulmer’s. As Katherine wrote on Houstionist: http://houstonist.com/2008/07/24/houstonist_bites_raias_italian_kitc.php. Raia joins the developing scene on . For a lunch crowd who wants Italian, I think its nearest competition is Nundini’s on Shephard http://www.nundini.com/foodstore.html which calls itself an Italian Deli and Food store. Since they have a steam table with a $6.95 lunch special, one could order the lunch special (which has a variety of choices and changes daily), eat in a reasonable time, and get back to work.

I had stopped in late during lunch time the day they opened. The deli had looked unused; there were no bread visible, lots of wait staff and the steam table, looked a bit tired at around 2 in the afternoon. I tried to buy something from the deli but no one was paying any attention to that part of the store. So I decided to return a couple of weeks later.

I grew up in Northern New Jersey surrounded by wonderful Italian food and was hoping that this place would go one step beyond Nundinis, that is offer well prepared Italian dishes (Nundini mainly offers good sandwiches and salads) and compete for my attention when it come to Italian deli items.

At least at lunch time, the deli sections looks like decoration as I saw no activity in the area of the meats, chesses or dry goods, pastas, oils, wines, etc. As I had complained before no bread was visible, for me good Italian = good bread.

Lambo and I choose the lunch special, while the rest of the Chowhounds http://groups.yahoo.com/group/houstonCH/ ordered a la carte. Check Raia’s website for a full menu and hours of operation, they are open for dinner as well and until 10 on Friday and Saturday nights.

o and I ordered the three item lunch special. I had a Caesar salad that was awful, it was soggy and limb. Chief Lambo liked hers and Neverfull who ordered hers off the menu said hers was not great, but mine was defiantly worse. I then had the seafood lasagna, a small square of lasagna, that was quite tasty, Lambo had the fish, which I tasted and thought it was at best non descript, but not fishy.

Neverfull, Fulmer and his friend, split a crab cake and claws appetizer Caesar salad, soup, chicken marsala eggplant parmesan and linguini pescatore. I though the Cajun influenced crab claws and cakes with the remoulade sauce was the best dish. The claws were great and the crab cakes filled with crab, quite flavorful and went well with the remoulade sauce. The seafood in my lasagna was slightly rubbery, but I expected that, but I did not like the taste or texture of it in the linguini pescatore, which had similar seafood. The chicken was well cooked and flavorful. I didn't care for the eggplant, it tasted dry, with little flavor but someone had added extra cheese and maybe that is what I did not like.

As for the tiramisu, it was a little square, the bottom layer with the soaked lady fingers was delicious, the marscopone topping, was more like icing and did not meld with the bottom.

My big complaint is that no bread was served and when we got some, it was just plain jane type bread.

The owner was very attentive and the service decedent. The atmosphere is inviting and friendly.

All I can say, if that while the prices are reasonable the food was just so, so. I am not enamored with the sound of their pizzas, there is a definite Cajun tone to some of their dishes, which I find off putting in an Italian restaurant, but I plan to return to taste at least on of the pizzas as they have a wonderful looking pizza oven – that could be used to bake some decent bread, no?

This is my first visit to your blog, your post made productive reading, thank you.
Semiconductor Market Report, Forecast, Demand Analysis 2020-2025 – Report Banana